Yuma Pests That Are Dangerous To Your Pets

Insects and pests are things that every household eventually has to deal with. Many insects found in many places across the globe usually cause harm by either biting a person or animal or by spreading infectious disease all around the place.

Insects could pose a threat not just to people, but to other animals as well. It may not seem like it, but pests could also cause a great deal of harm to our much-loved cats and dogs. Therefore, great care needs to be taken when moving into a place with your furry companions, as they could also encounter pests that could cause both them and you some harm.

Because of its dry, arid climate that is different from other places in the United States, Arizona as a whole is home to various insects which could become household pests, and Yuma is no exception to that. These insects could also become both a nuisance and a threat not just to you or to your family, but to your cats and dogs as well. Here are some of the bugs that you and your pet need to be extra careful of:

Ants Can Bite Your Pets

Ants are pests that everyone in the world has to deal with. After all, ants crawl around food on the table if left unattended. But Arizona is home to a different species of ants known as fire ants. These ants, which are prominent for their bright, fiery red color, can cause harm to both people and pets if they are not careful enough.

When triggered, these ants carry a powerful bite that could be painful and leave a sting on the skin that could last from a few hours to a few days. No matter how small these critters are, you and your dog or cat should stay away from these ants or you could always get rid of them in your house so that they could not cause any sort of harm.

A scorpion in your home may not seem a pleasurable or a likely situation that you will get into. And no one likes to be in contact with these creatures, let alone touch them. However, Arizona's dry, desert-like climate allows these scary bugs to be a common sight in many areas around the state.

Scorpion causes harm in two ways. The first one is through its claws which it often uses to catch smaller prey. The second (and the most common and terrifying one) is through the venom on its pointy tail.

This is also used by scorpions to kill prey, but a dose of this poison could cause serious harm not just to your family, but to your pets as well. Its sting is dangerous enough to bring you to the hospital or your pet to the veterinarian. Since they prefer hiding in the shade and in citrus trees, steer clear of these places if possible to avoid potential harm and refrain your pets from going and staying in these places. 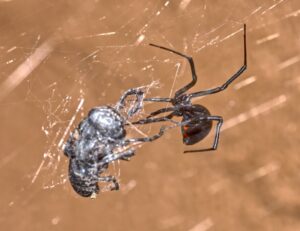 Spiders Are Dangerous To Pets

Just like ants, spiders are a relatively common bug that can be seen in houses all over the world. While some spiders are not harmful to humans and some even benefit them by preying on insects that could serve as pests, some spiders found in Arizona, such as the Arizona brown spider or the black widow spider, could deliver a powerful sting that can cause pain to most people or even a serious allergic reaction to those who are sensitive to them. This is not just the case with humans, but with dogs and cats as well. Most of them will get bites in various parts of their bodies when encountering these critters, which is a strong indication of spider infestation in your area. Because spiders often lurk in places such as your garage, patio, or yard, you should take extra care of your dog or cat when it wanders around these places.

Watch Out For Bees

Owing to its agricultural sector that serves as a huge economic force, you and your pet could see bees occasionally outside your house when you move to Yuma in Arizona. Usually, they are found in places such as air-conditioning units, pools, or areas that have water since they buzz around in these places to get water. While bees are helpful in pollinating plants and mostly attack only when their hives are disturbed, some bees such as killer bees are aggressive and attack in swarms. This is a major problem not just for you or for any members of your family, but for your pets as well, who could encounter and try to chase these insects down. Therefore, make sure that your pet stays in a place where he or she could be safe from a bee's sting.

Ticks are a parasite that causes harm mostly to dogs, but it could also harm cats and even to humans. And they're all found in Arizona including Yuma. While only a few species of ticks could be found in Arizona, such as the brown dog tick, these insects could carry a disease known as the Rocky Mountain spotted fever that could only be treated with antibiotics.

If you find ticks on your pet, seek a veterinarian immediately!

As you can see it's not just us humans who have to worry about dangerous bugs. Our furry loved ones also need a pest free home. To keep you and your pets same from dangerous insects, call the experts at Hitman Pest of Yuma today!